Right now at The Chapter Four, Ionic has this really cute gacha set available called Let’s go Somewhere. Spell is also at the event and they have a complimentary gacha called Noviembre. They both inspired me to send my avatar and her beau off on a fun journey. It reminded me of my fun train trips earlier this year when I went down to Grange upon Sands. I enjoyed my holiday so getting to set this scene up was like reliving it all over again and now makes me wish I could go away for the approaching Christmas season. However, like the average person, I can’t afford two holidays in the year. So my next one will just have to wait next year again.

Some of the gang from The Story of Raccoons & Bears by Ionic were more than happy to take the train too and since this is leaving shortly it’s probably wise that my Bear girl hops on it too. No one likes a delayed train. While they get the suitcases on board I’ll lead you into the comments below.

*Although I do not have all the details of Ichi’s outfit I do have an idea where they are from. Her Hair is from Moon, I believe her cardigan is from Fd (Fashionably dead) and her jeans are from Evani. 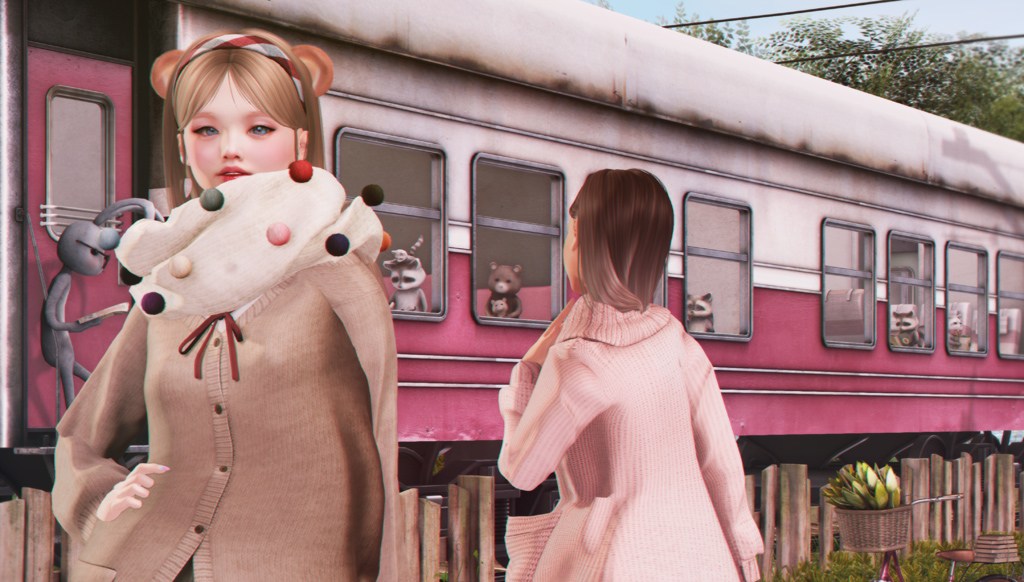 Passengers (all come from..): [ionic] The story of Raccoons & Bears gacha @Mainstore

Bunny reading a book: [ionic]  The Nerd Bunny (from the ‘Friends!’ gacha) @Mainstore

All above items have been kindly provided by Creators for blogging/review purposes except for those denoted by *.

But…these are my things

We can light up the sky

Help with the packing

All together now, again