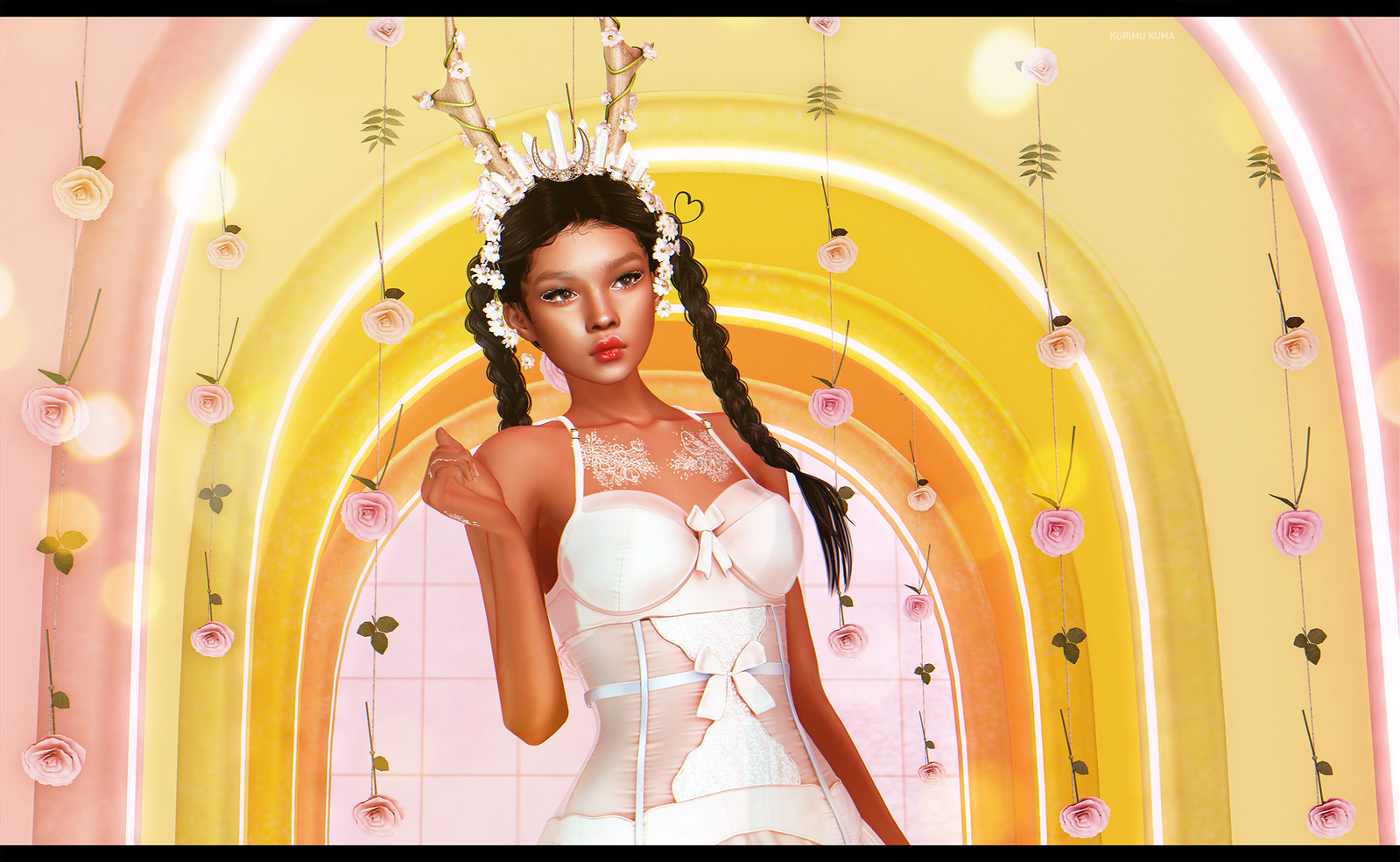 I wanted something fun and bright when making my next picture. One of those colourful images that makes you either squint or leaves you enraptured with the shiny. It’s the magpie effect. So, today I’m bringing you more goodies from Collabor88 but also some fun things from the freshly opened round of ‘The Girl Power Event’ if you haven’t been you really should. Both events helped make today’s magical style.It’s not extravagant, it is simplistic enough to wear walking around whatever sim you like but you still look magical doing so. The only thing I would have added to this outfit would have been a lovely flowing see through cape that hung on the shoulders by a fall of flowers. Small and rather similar to the ones in the garland/horns. It would make it great for pictures but it would have it’s own set of troubles when trying to sit or do anything that requires a lot of actions. I did try wearing lace gloves but I thought that detracted away from it, much like the stockings I initially tried. It’s one of those times where it’s better as a Sailor Mars look for the legs. Elegant, high pointy shoes teamed with long bare legs. Oh and here’s another tip, don’t do a ‘me’ and think you know the alpha cuts better than the dress does because yes, that’s totally what I did. 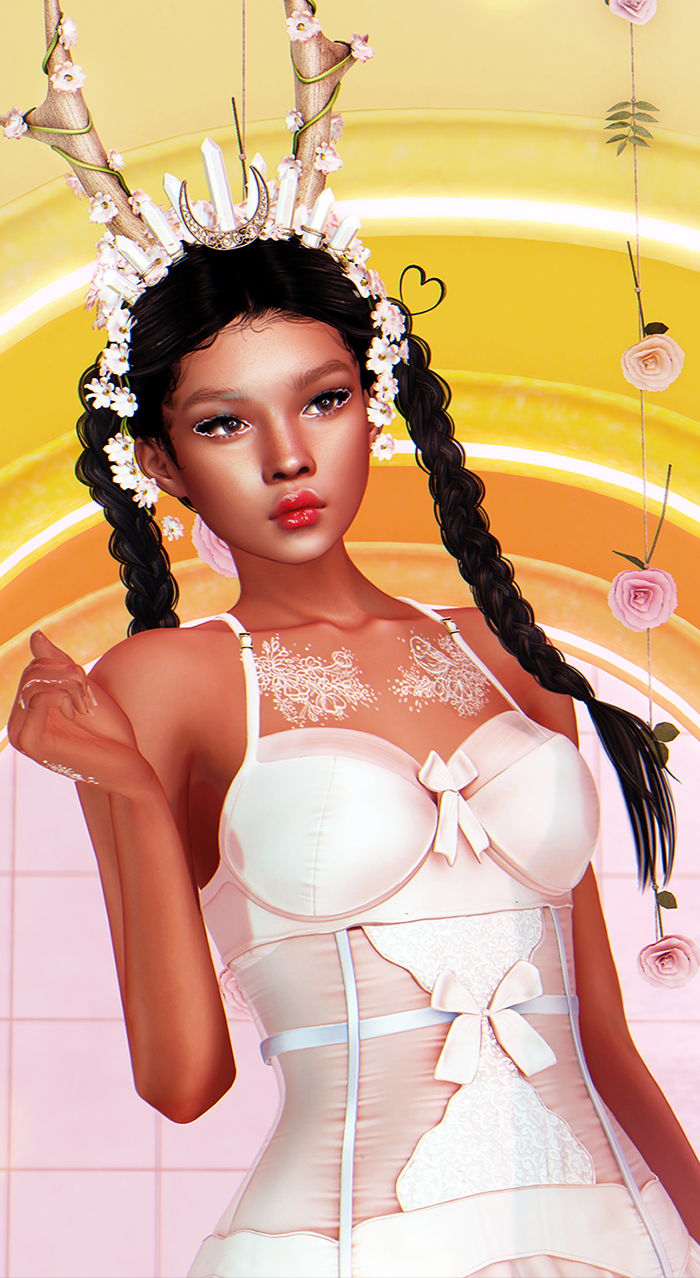 There’s something else I would have tried to see if it also matched and that’s the wings by Decoy which are also at collabor88. They are really pretty and come in lots of colours but I only bought it in black and black clashed with my look. I probably should have gone with a lighter colour but those fairy like wings are very cute. You should definately check it out. I wanted to show you as much of the pretty make up as possible so it’s a waist up image simply because the make up is so pretty you really need to see it. It’s not often my avatar works well with make up on dark skin that the few times it does really work it ‘has’ to be a visible part of the picture. Simply because I get so excited.

Most make up is too bright or just looks cuter on lighter tones (and sometimes they tell you that but me and my stubborn self defies advice because dang it I want to be a pastel cloud) and then sometimes you find some and you’re like woww that’s so cute! and this one is. The eyeshadow and lipgloss are adorable! I even included a closer, non-edited shot from inworld so you can see not just the make up but the cute eyelashes too I teamed everything with the black eyeliner from Enfer Sombre that I still haven’t been able to let go of because they just look perfect. I used it on BOM while I applied the pretty eyeshadow on the mesh head. 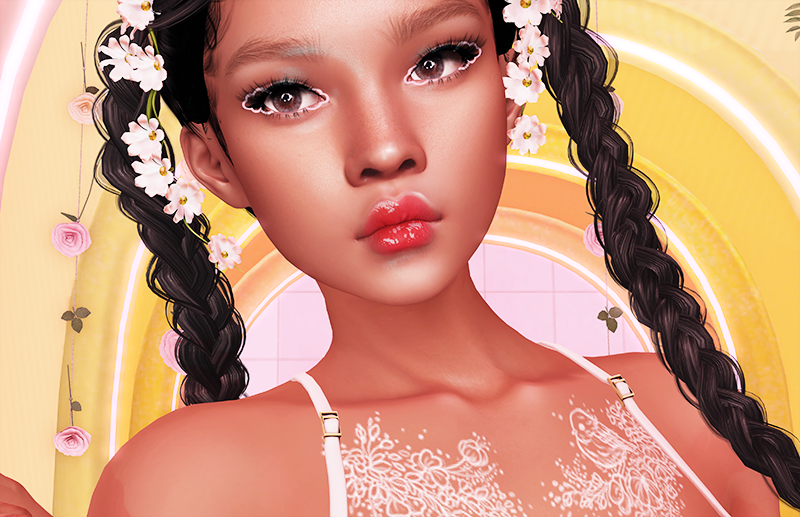 I also really like the backdrop, I think I bought it during the weekend sales but the colour just called to me. It was everything and I could get lost in that happy colour. Do you feel like you are ready to shop now? Yes? well, lets get into itttt~!

*mesh body used is the legacy perky mesh body combined with the lelutka ryn mesh head and eye applier is from Mudskin. I wish I could say I remembered what pose was used here but I forgot. I’m as frustrated with myself as you no doubt are.

Not so innocent magic