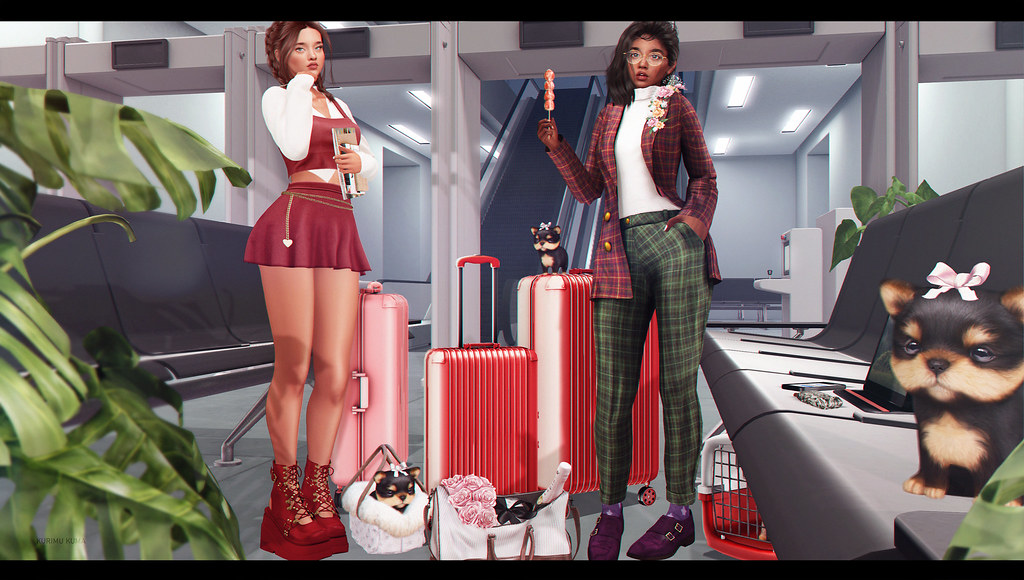 Hi guys! How was your Valentines and your Galentines if you did one. I spent the previous baking cookies for everyone and the latter having a whole movie night with snacks. It was fun to be fair. We even managed to squeeze in the Lunar New Year and so I’ve been somewhat quiet online. Now that everything has died down and work is done I’m back again for the next rather large post. I will try not to make it too image heavy. I promise.

Today’s post is featuring even more goodies from Collabor88, in my last post I only got to show you two items, well in this one there are even more. I think you know now where your next shopping is going to predominantly lead you. I even got help this time because there’s a bunch of it and more to come yet. I’m excited, can you tell? Collabor88’s theme this month is jetsetter and so with all the travelling things on offer I decided that today’s image would be themed around that. Bad Unicorn had a whole bunch of Airport stuff which set up the scene so nicely. I wanted to get as much of it into the scene as they are really well done and don’t deserve to be lost somewhere in the back without actually getting to interact with the image. These chairs are by Nomad and that really fit in so well it was like they were made for it. They gave me airport flashbacks, honestly. Sure we can’t really go anywhere but for a brief wonderful moment I re-lived a time I could.

I titled today’s post after a tv show that we used to watch here in the UK. I really liked that show while it was around. It made me laugh so much, usually quite guiltily because..wow. Things you know you really shouldn’t laugh at but you can’t help it. I actually liked the characters and their quirkiness they were endearing because of them.

I know we probably won’t get very far with all the puppies on the loose but I think we will eventually get them under control. Oh, wait! before I forget, I have to tell you about this suit, I know I know, it won’t be long. The suit when I put it on the first time and tried to change the hud to skin match I wanted to cry. Does anyone else really struggle with skin matching on huds for clothes when your avatar’s skin happens to not be pale??  Turns out…I didn’t have to. It came with the ability to swith the hand to BOM. Here’s where I add the explosion sound effects. My mind…blown. Now my hand matches seamlessly and I’m no longer left out of the cool crowd. I even love the shoes I feel like I’m running around in my brother’s shoes again. I love this. I feel very smart but also rather quirky hence my choice of colours.

Sa-chan is the normal one in this dynamic, don’t look to me for normal. The colour combination just made something feel happy inside, this is sometimes what happens when you let me loose with fatpacks. This is my take on Casual, smart…chaos. At least that’s what I’m going to call it. One more thing, just one and then I’ll take you through the credits…what do you think of the puppies?! They are so adorable aren’t they?! Aren’t they though?!

*All above listed items have been kindly provided by creators for blogging/review purposes. Mesh body used in today’s post is the Legacy Perky using deformers and combined with the Lelutka mesh head Lilly.

Come cuddle with me

Just sprinkle some roses over it

All together now, again